Behind the Scenes with the Ronin 2, Faster Still – Filming Cheetahs in Namibia 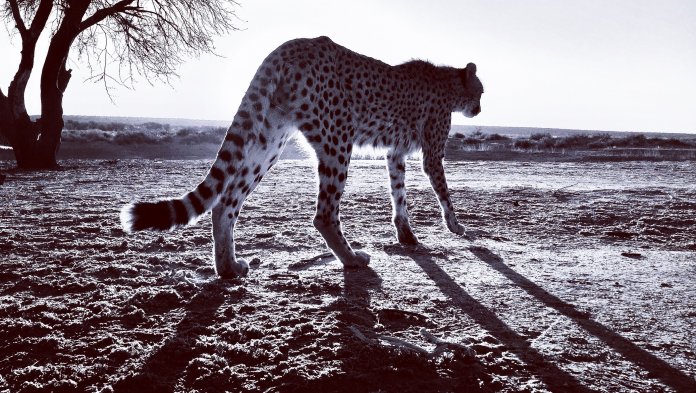 Renowned British cinematographer Toby Strong is in the back of a land cruiser hunched over a Ronin 2 remote controller — his face fixed in pure concentration. The heat of the Namibian sun beats unapologetically from behind him, and the unevenness of the dirt road rocks him involuntary back and forth. It’s make or break, now or never — he has to get the shot.

“Faster still!” he shouts to the driver. The speed dial moves from 60 to 70 km/h. Next, we see what the camera sees. The majestic yellow coat and dark spots of a cheetah, the world’s fastest land mammal, though here running in slow motion for extra effect.

The video is a behind the scenes look at how Strong used the Ronin 2, DJI’s powerful 3-axis gimbal, to capture cheetahs up close and personal for a Nat Geo project called One Strange Rock, which will air in March 2018, directed by Oscar nominee Darren Aronofsky and starring Will Smith. The set is the Naankuse rehabilitation center whose mission is to “conserve the land, cultures, and wildlife of Namibia, Africa.” It’s a place where cheetahs who have been injured or abused are well-looked-after with a vast open space to run around in, says Strong.

As a result, most of the cheetahs in the film are habituated and accepting of humans, something Strong’s team were eager to take advantage of.

“Traditionally, I’d use a long lens but here, I felt I just wanted to walk with them and wanted it to be cinematic, so I knew it was a gimbal situation,” he says down a crackly phone line.

Strong knew he needed something reliable and versatile for the shoot. He’d be jumping in and out of Land Rovers and so required something robust enough to carry around for three to four hours at a time. After contacting DJI, Strong was given furnished a brand new Ronin 2, DJI’s cutting-edge gimbal tech for pros. 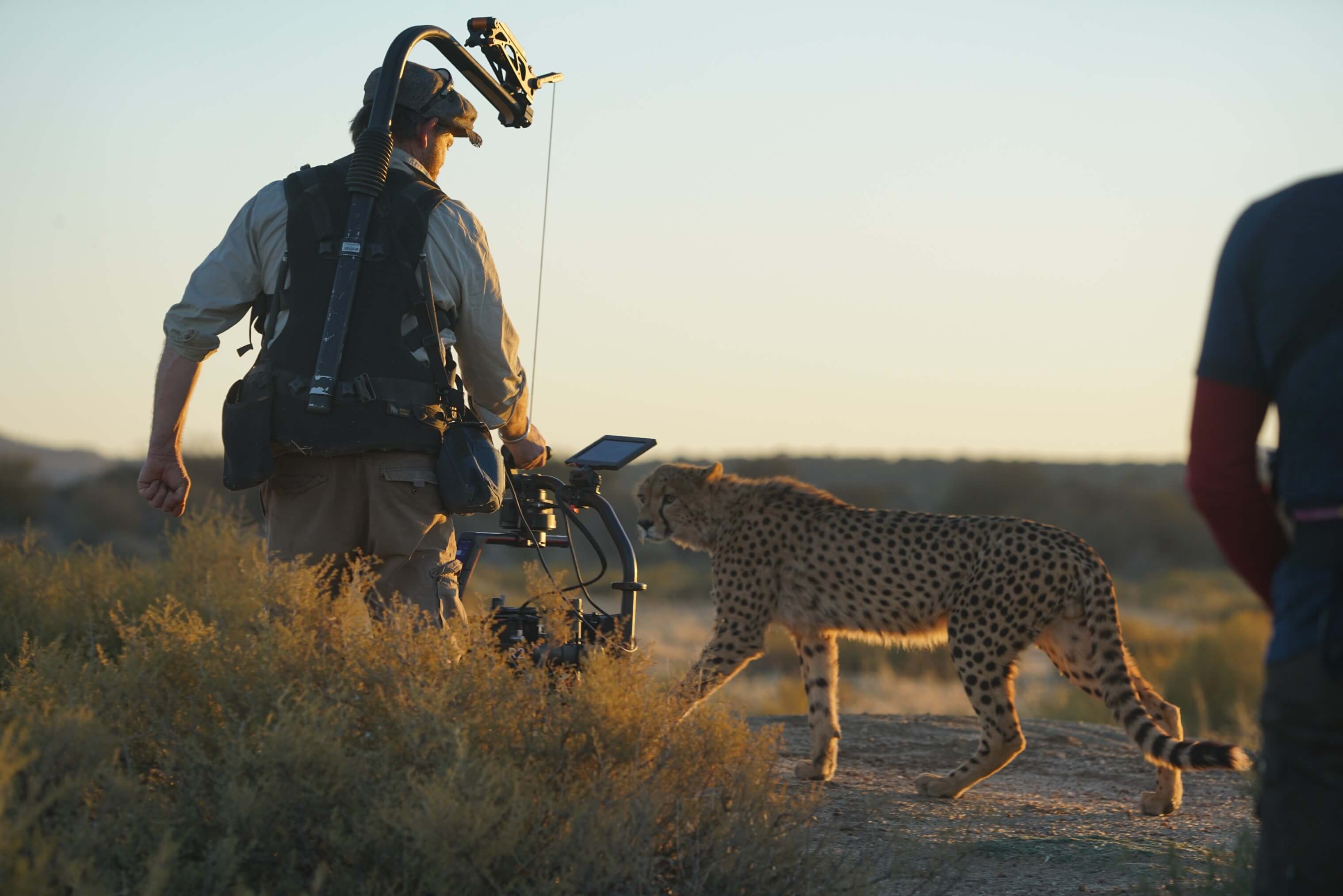 “And we took it out there, and we just hammered it. We hammered it for a couple of weeks,” Strong recalls proudly. Having owned the original Ronin for some years, getting used to the Ronin 2 was a relatively intuitive and straightforward progression. More than that though, everything he expected from DJI to improve upon was and then some.

“All the things I felt were lacking on the original Ronin were just magically there on the Ronin 2. It didn’t take long at all [to get used to it]. The balancing was easy, and the controls were straightforward.”

When DJI unveiled the Ronin 2 at NAB last year, the world was introduced to what cinema5d.com has describes as “one serious movie-making machine.”

The Ronin 2 boasts five times the torque of the original Ronin gimbal and much of the sturdy, exceptionally well-constructed improvements, were gleaned from the prized feedback of potential users, Strong included.

An Emmy Award winner with an illustrious career as a cameraman and cinematographer filming wildlife — including some years filming cheetahs for the BBC’s Big Cat Diary, which aired between 1996 to 2008 — Strong proved to be an ideal Ronin 2 candidate for feedback, helping to provide suggestions for final product design.

Back in Namibia, Strong and his team were up at the crack of dawn to film the cheetahs.

“They’d come up and say hello, and you’d hear this huge purring as they rubbed their heads against you,” he recalls fondly. 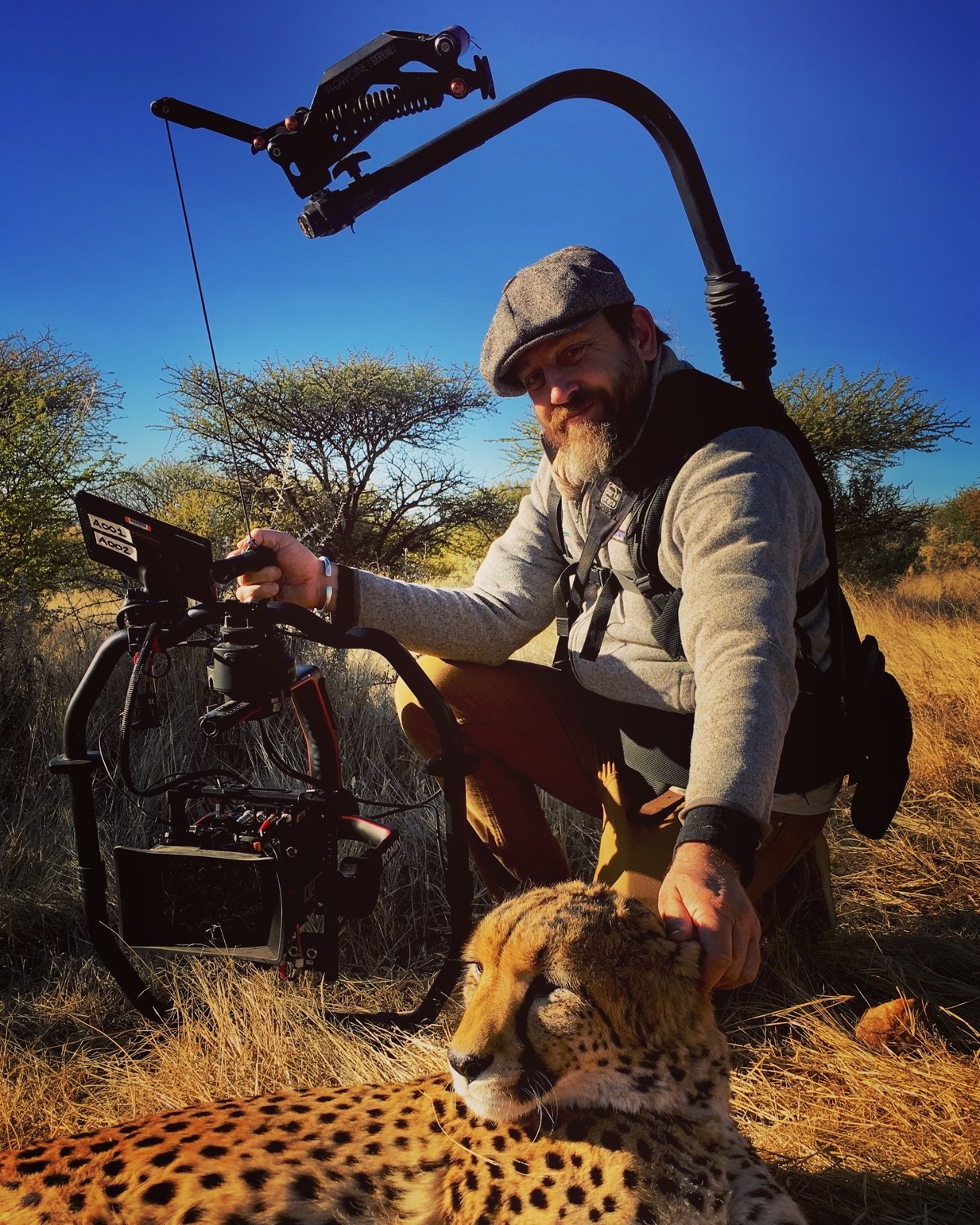 Using a support system with a Flowcine serene fish arm with a screen, Strong could film and walk with the Ronin 2 for up to three hours at a time without issue. For these shots, he had a Red Epic Camera with some ultra prime lenses. A member of his team pulled focus using a DJI Follow Focus, a process Strong describes as ‘brilliant’ because the integrated DJI system is wireless — the opposite, an abundance of wires is a guaranteed nuisance out in the field.

This setup allowed Strong to bend down low and track the cheetah’s feet as they moved through the dust, rising gradually to be level with their shoulders. Using a roller and DJI Focus Thumbwheel, Strong could operate the Ronin 2 autonomously and still be able to shoot tracking shots with a shallow depth of field, the quality of which, was thought mostly impossible until only a few years ago. 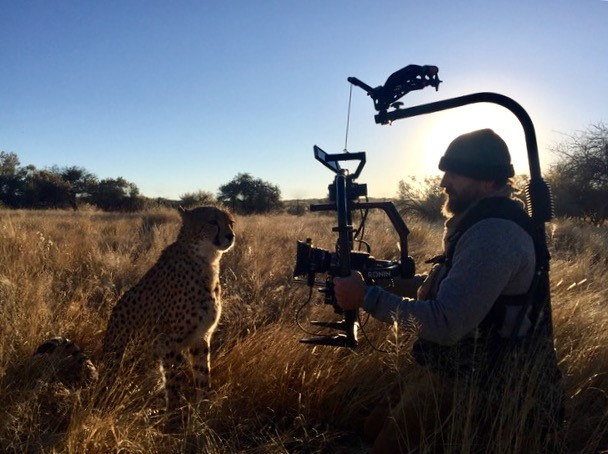 “With this system, I could walk two or three hours without any problem or discomfort, and I could be level alongside their faces with the sun behind,” Strong says.

Speaking from the experience of a professional filmmaker versed with the risks of gimbal filming — “especially with all the unpredictable movement and banging about through bushes” — Strong says the Ronin 2 completely blew any competition out of the water.

“Having used gimbal setups in the past that have wobbled on me,” Strong pauses and then elaborates; “you see, if they even get knocked about a bit, they lose balance. But with the Ronin 2, we never lost it. Not even once.”

When the cheetahs went off hunting for a feed, the team would pile into an open Land Rover to keep up with them. One of the great features of the Ronin 2 is the ability to push a button and disengage the motors rapidly. Users can then re-engage quickly to set up in another position. 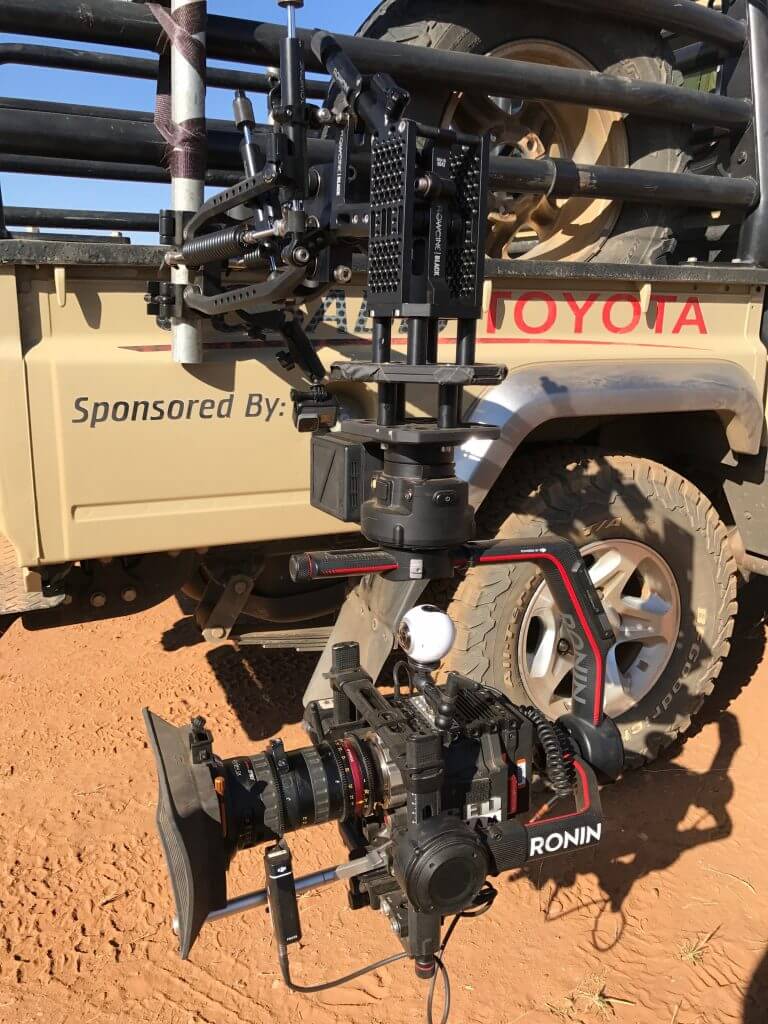 Strong would jump on the back of the cruiser, disengage the motors, and then they screamed through the reserve in front of or alongside the mammals.

“I’d jump out again, re-engage the motors, and I’m back on them [the Cheetahs] instantly,” Strong remembers, the excitement of the memory causing him to retell it hurriedly.

Over the intensive two-week period, Strong and his team tracked the cheetahs at speed by mounting the Ronin 2 on a black arm to the back of the land cruiser. For this shoot, Strong opted for a Canon 32-105 lens — “a big old lens,” he says, but nothing the Ronin 2’s increased power couldn’t handle.

“Overall, I found the Ronin 2 to be an excellent bit of gimbal tech,” Strong concludes.

“For those two whole weeks in Namibia, we put it through a rigorous field test.”

As it bounced around in a vehicle every day, got knocked, and with a buildup of excessive dust and heat, for Strong, the Ronin 2’s resilience was just amazing. It was light enough to use handheld for about an hour and sturdy enough to be rock steady with a zoom on a black arm on a dirt track at 60-70 kilometers an hour.

“I was deeply impressed,” Strong says.