The DJI Zenmuse X7 vs the RED Weapon 8K: Our First Impressions with Test Footage!

Released on October 11, 2017, and shipping in early November, the DJI Zenmuse X7 is the world’s first Super 35mm camera made for aerial cinematography. It offers everything professional content creators need to make their aerial footage as stunning and vivid as they demand. With a maximum video resolution of 6K/30 fps and a dynamic range of 14 stops, these enhancements put the X7 comfortably at the top of the market for professional aerial cinema cameras.

Back in 2015, DJI introduced a fully-fledged RAW camera in the X5R. And in just two years, the performance of their cameras has vastly improved, developing a product that can compete with most high-end cinema cameras.

Let’s first talk about the X7’s specifications. We see a considerable improvement from the X5S, evolving from a Micro Four Thirds to a Super 35 mm sensor. Also, the sensor size has increased by more than 60%. As a result, image noise in low-light environments has been reduced and now operators can enjoy more flexible applications. 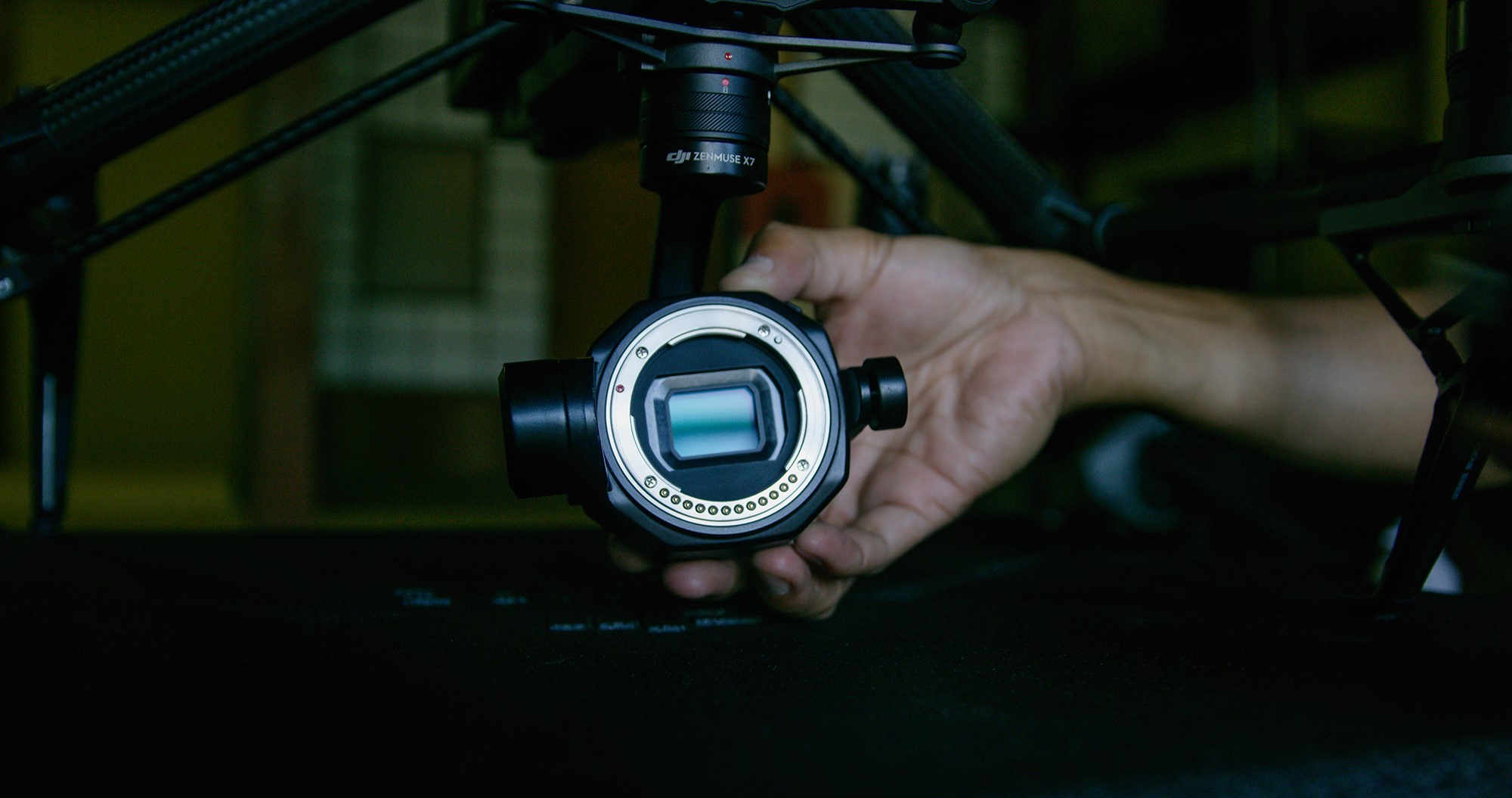 The X7 uses an APS-C (Super 35 mm) sensor, which is the same as a professional-grade camera.

The X7 can record video with a maximum resolution of 6K (6016×3200, 19.25 MP). Still image resolution is 24 MP, roughly 10% more than the X5S, which essentially puts it on-par with a full-frame SLR camera. The X7 almost reaches levels of the Sony α6500 with a mid-tier APS-C sensor to perform competently for commercial use.

TheX5R and X5S are both resilient to shadowy areas. Personally, I feel that their dynamic sensory range was over the listed 12.8 stops. The X7 has a dynamic range of 14 stops, just like ground-based cameras like the Sony FS-7 or Canon C300 MKII (when filming with Canon Log 3). It’s absolutely amazing that DJI has created a camera with such high-quality specs only two years after launching the X5R. 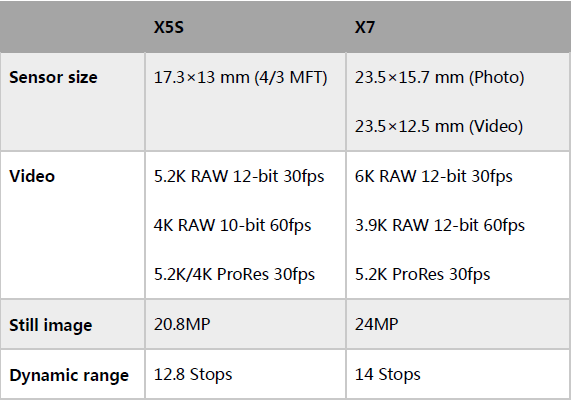 The X7 brings a large number of changes from the X5S. These include:

Since we were so impressed with the X7’s specs, we thought it would be fun to test it against RED’s flagship camera, the Weapon 8K.

We conducted the comparison test on the Jogasaki Coast in Ito, where we encountered heavy direct sunlight. In such locations, the real challenge is dynamic range control. We also had an indoor filming test to shoot outside from a room. We mounted the X7 on a tripod to match the angle of view with the Weapon 8K as much as possible. We also attached the ND filter in even density to have the same focal number and shutter speed. 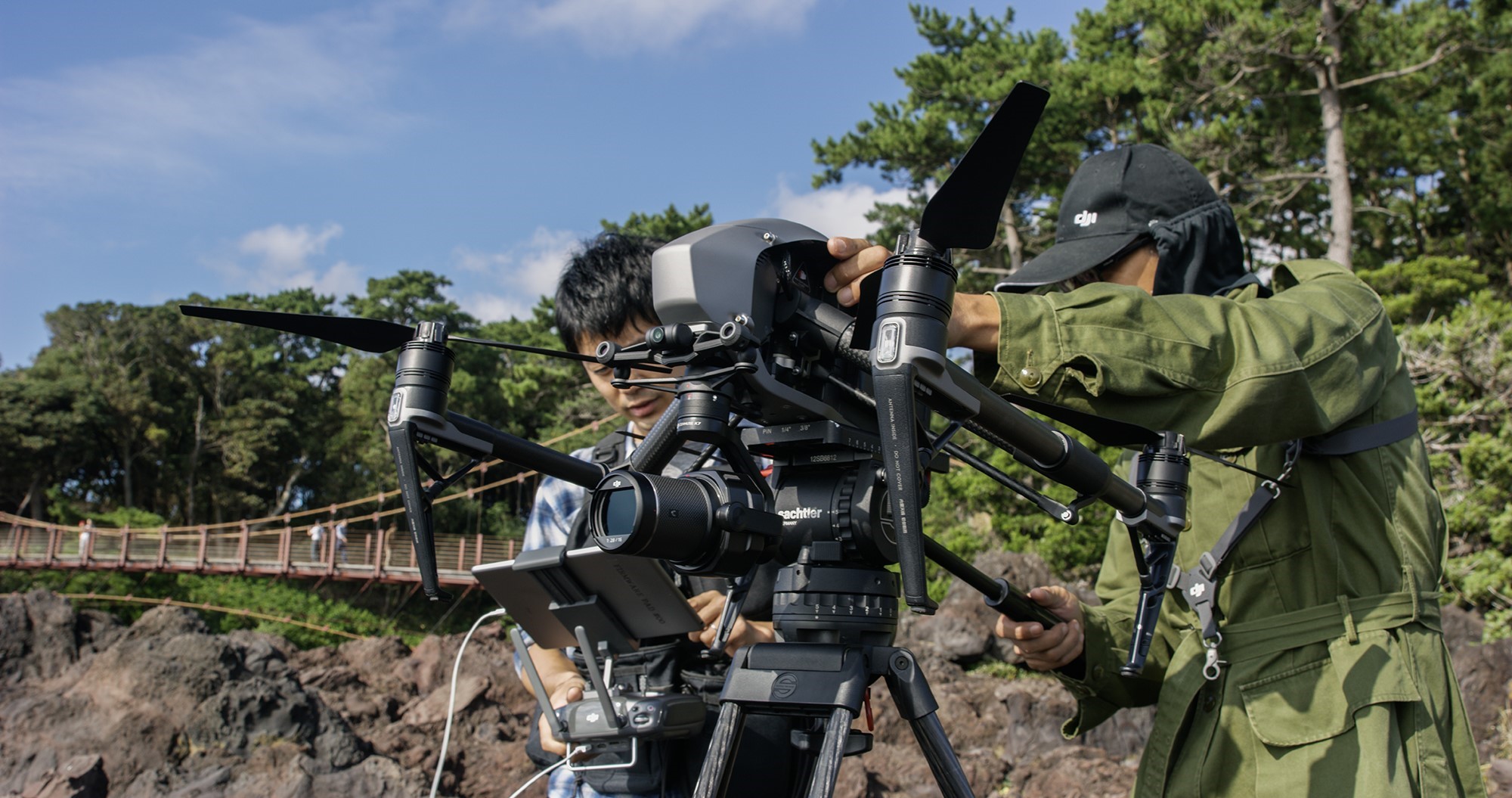 We tested the Weapon 8K first, then the X7 one minute later to maintain the same natural shooting conditions. The Weapon 8K has more than 16.5 stops (based on available RED information) for one of the highest dynamic ranges in the market. We checked the RED Touch display waveform monitor. The severe testing environment almost completely maxed out the highlight and shadow warning indicators. However, the Weapon 8K withstood and managed the test environment. After grading, the once-collapsed color of rock surface had recovered.

[Before (above) and after (below) images taken with the Weapon 8K] 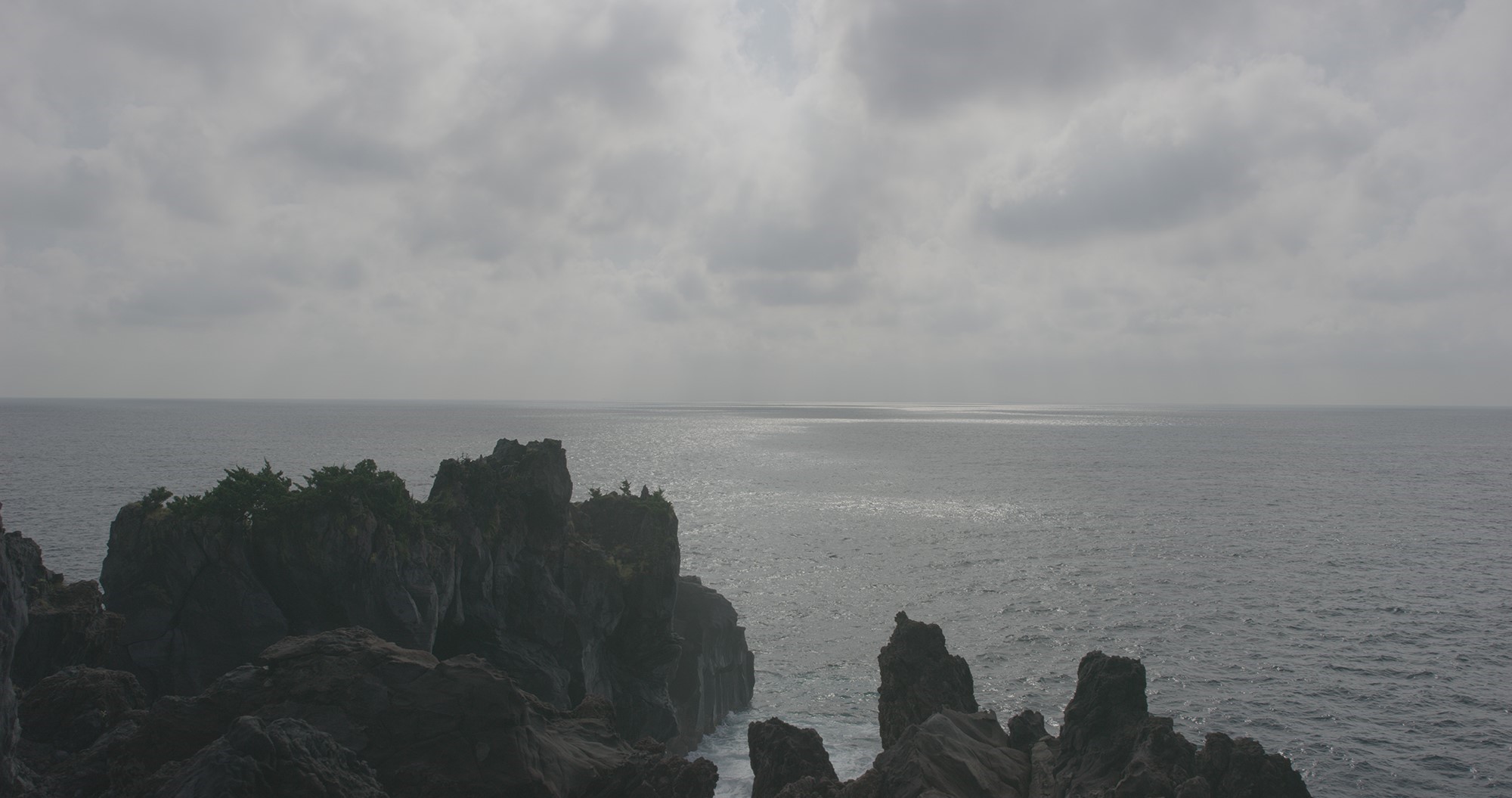 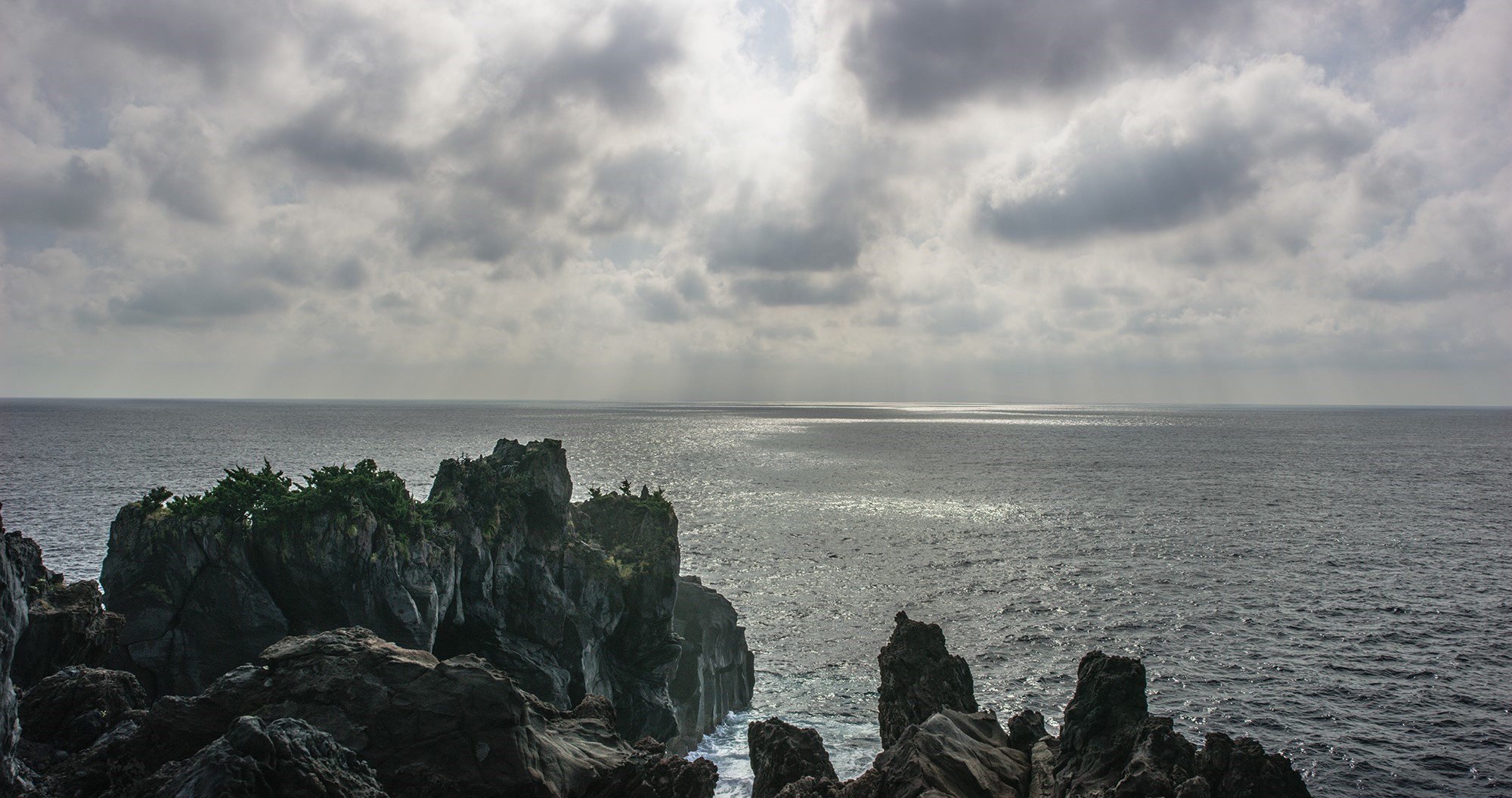 ▲The gamma curve on REDlogFilm. The contrast is strong but there is no color skipping, thanks to its cinema camera capabilities.

The filming environment was difficult to view with the naked eye. This required full use of the Weapon 8K’s dynamic range. Given the X7’s lower range, we presumed an unfavorable test result. For the X7, we shot in RAW in 6K CinemaDNG in order to not skip highlighted color areas so we can get a good result.

After editing, we were surprised to see almost the same results as the Weapon 8K. Compared to X5R/X5S, the recovery of highlights with the X7 has improved drastically. Until now, it was hard to expect that the color would recover if the highlighted area skipped, even just a bit. However, the gradation on the water surface was recovered, despite the fact that the reflection of the sunlight on the water surface was the strongest and the color tended to drag. For aerial photography, the reflection of clouds and sunlight requires a high dynamic range. But with the X7, we presumed that color skipping could drastically be reduced.

[Before (up) and after (down) images taken with the Zenmuse X7]

▼The resilience of shadow is also very high.
The gradation from the highlight to shadow area was mostly intact. 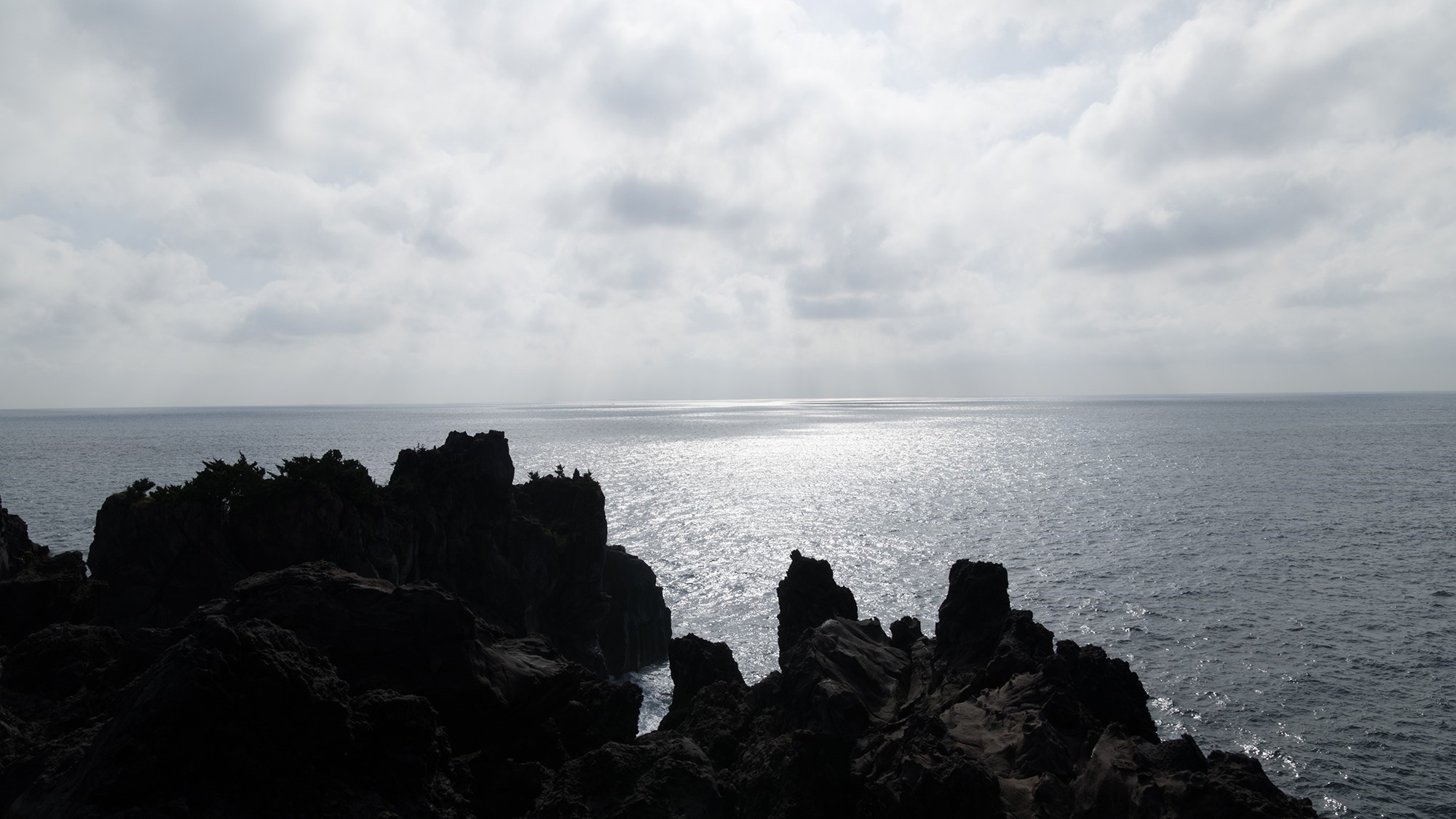 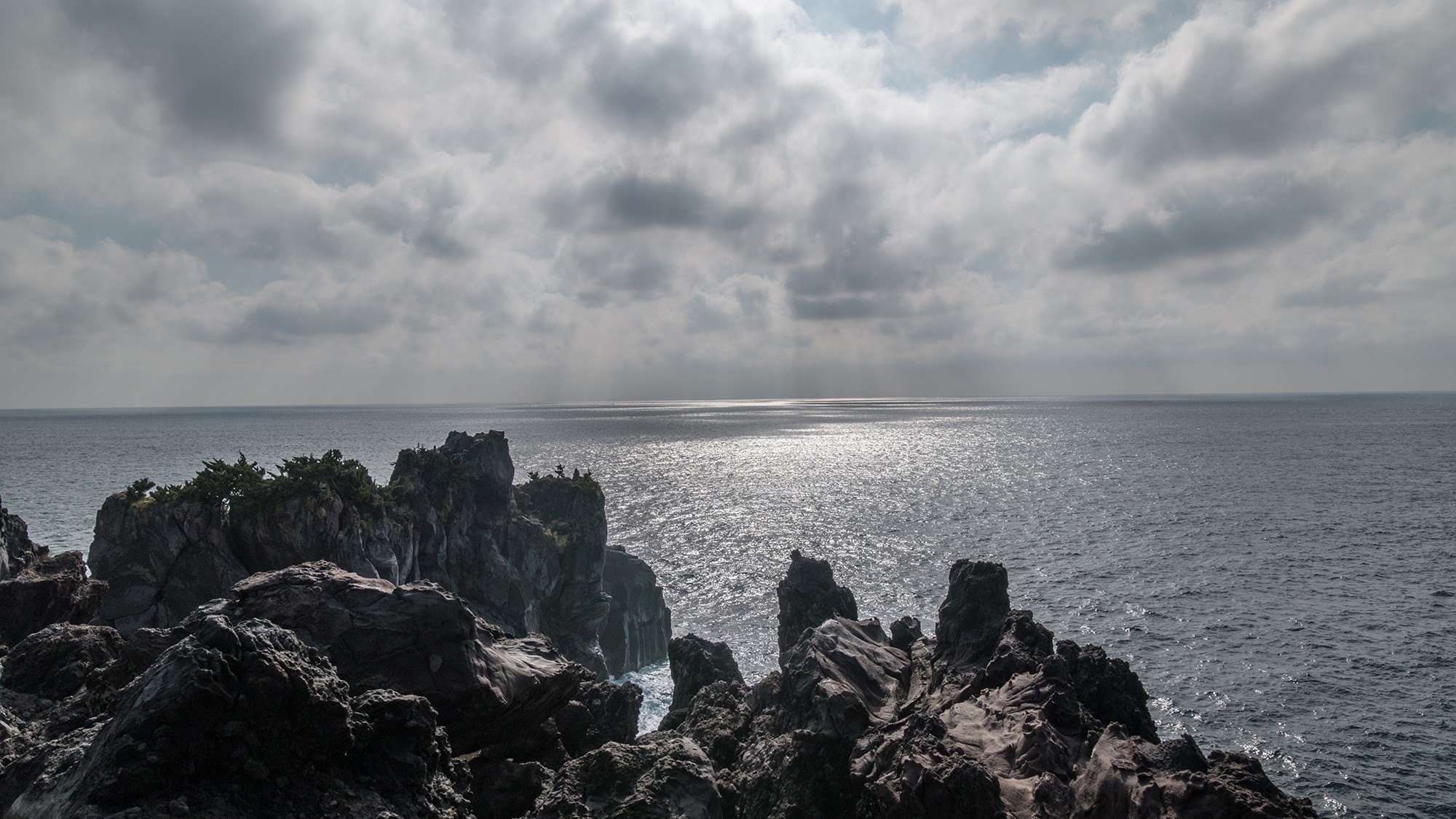 We also tested DJI’s newly-designed D-log. It was somehow difficult to use their previous version because it easily produces noise in certain situations. Generating less noise, the new D-log can complete an extremely beautiful image with fine adjustment of contrast and saturation when filming with a proper white balance.

We edited our test images with DaVinci Resolve 14 and Mini Panel. It took less than one minute to finish the color grade in some instances. This new D-log provides beautiful color while being easier to use. 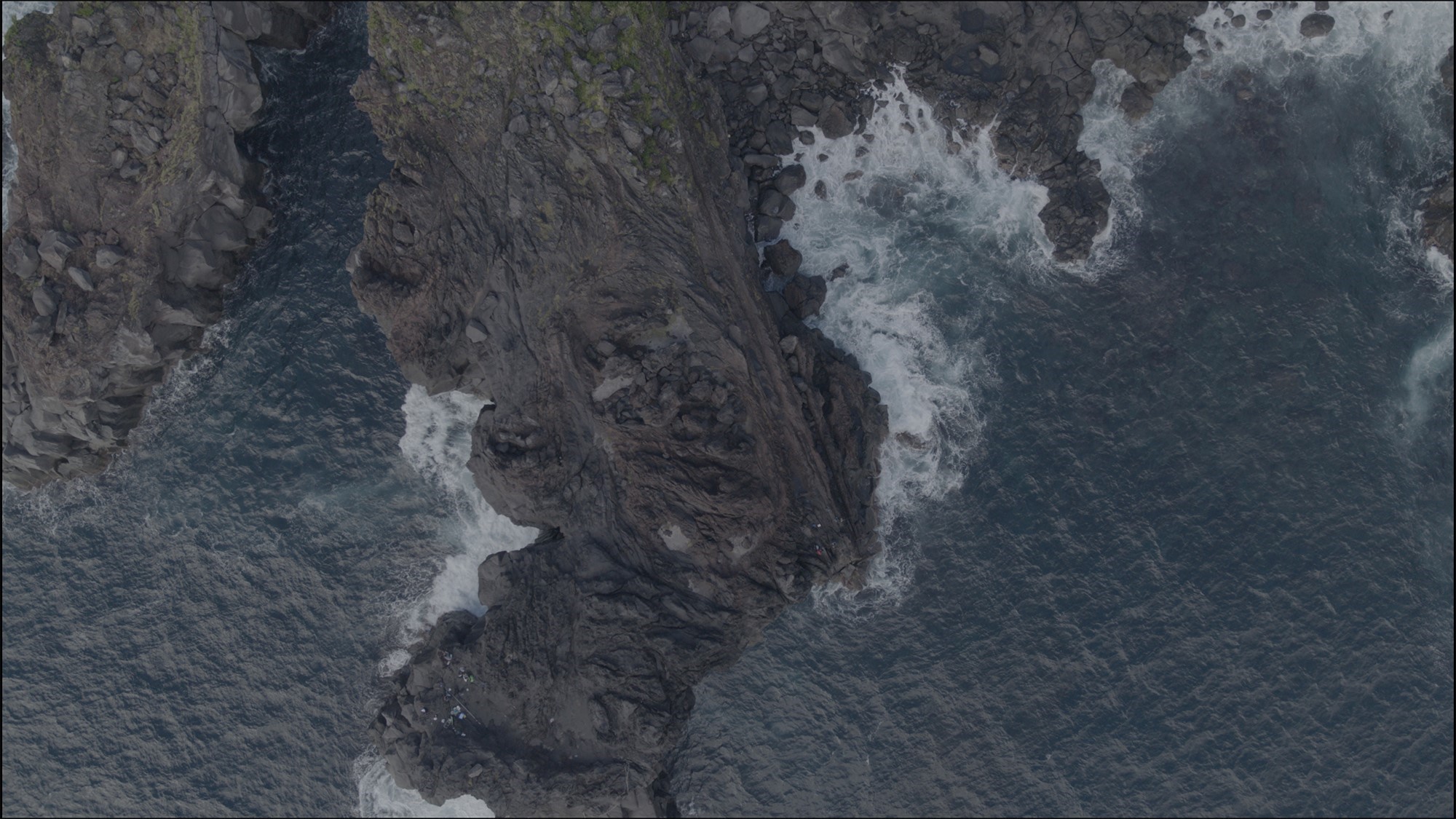 We conducted our indoor test within a hotel room with both cameras pointed outside. A scene like this is extremely difficult to film, even with a professional cinema camera. However, X7 sufficiently exhibited its high dynamic range capabilities, and we were able to control color skipping. The result was almost equal to the Weapon 8K test data. 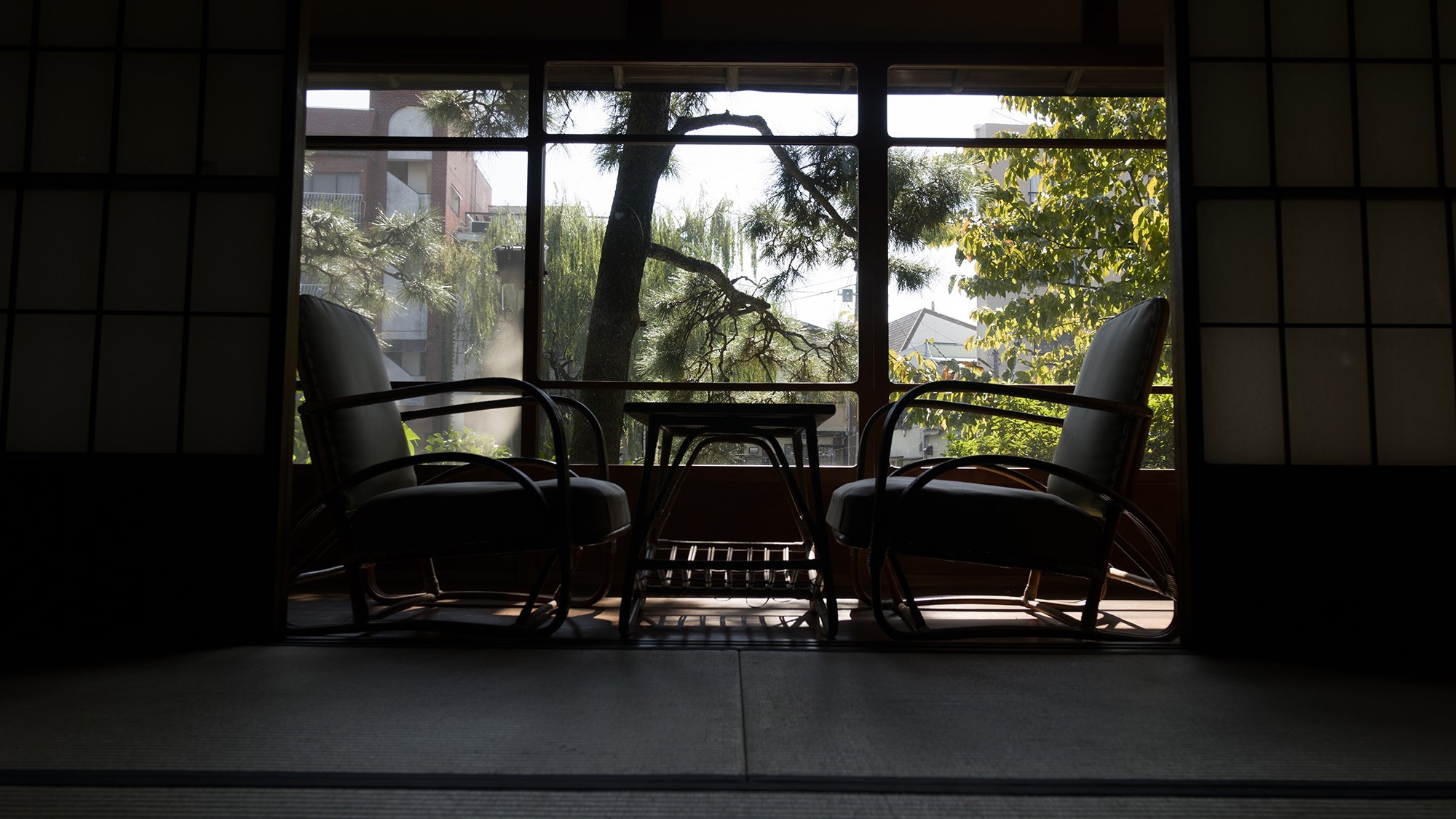 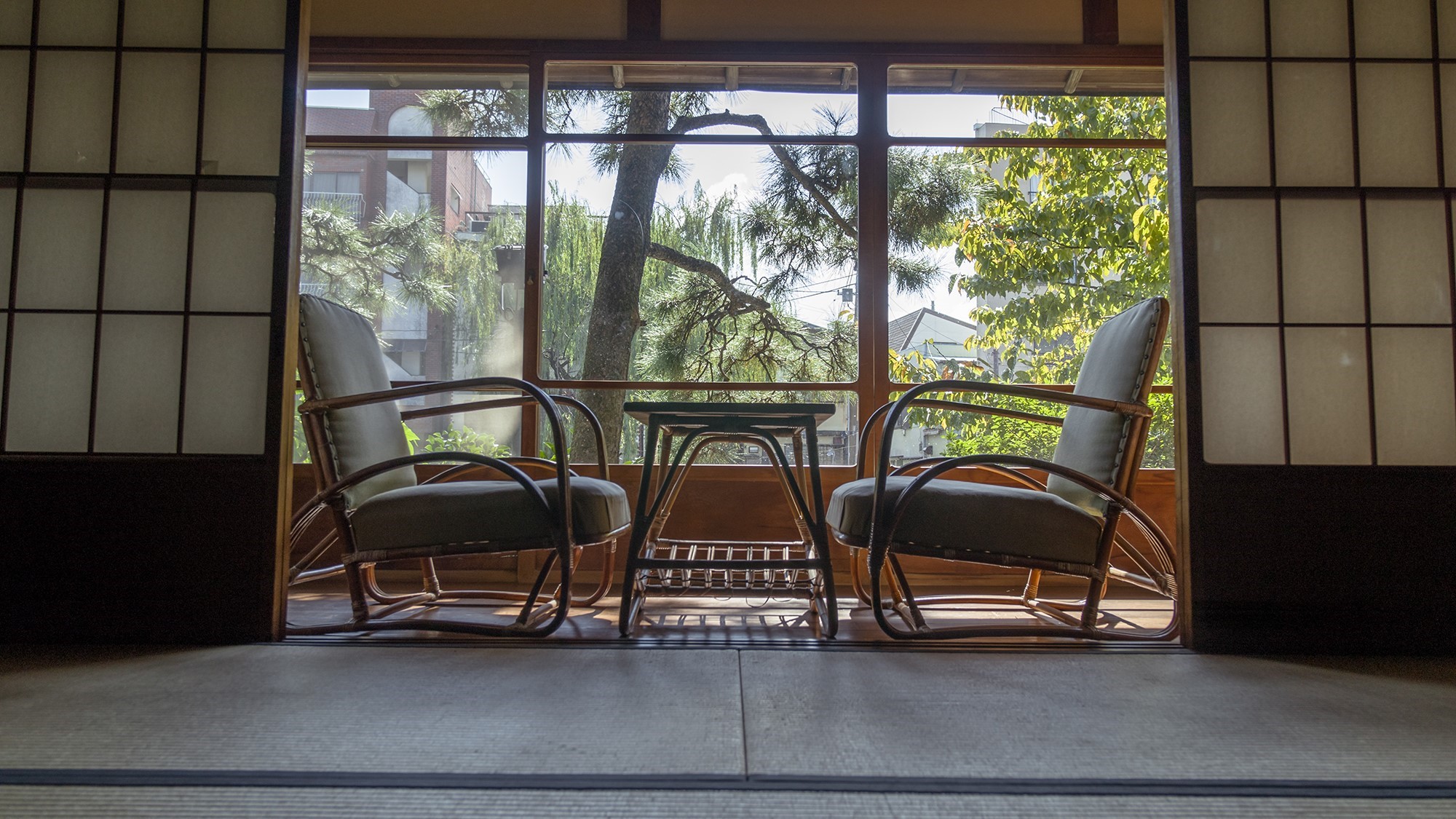 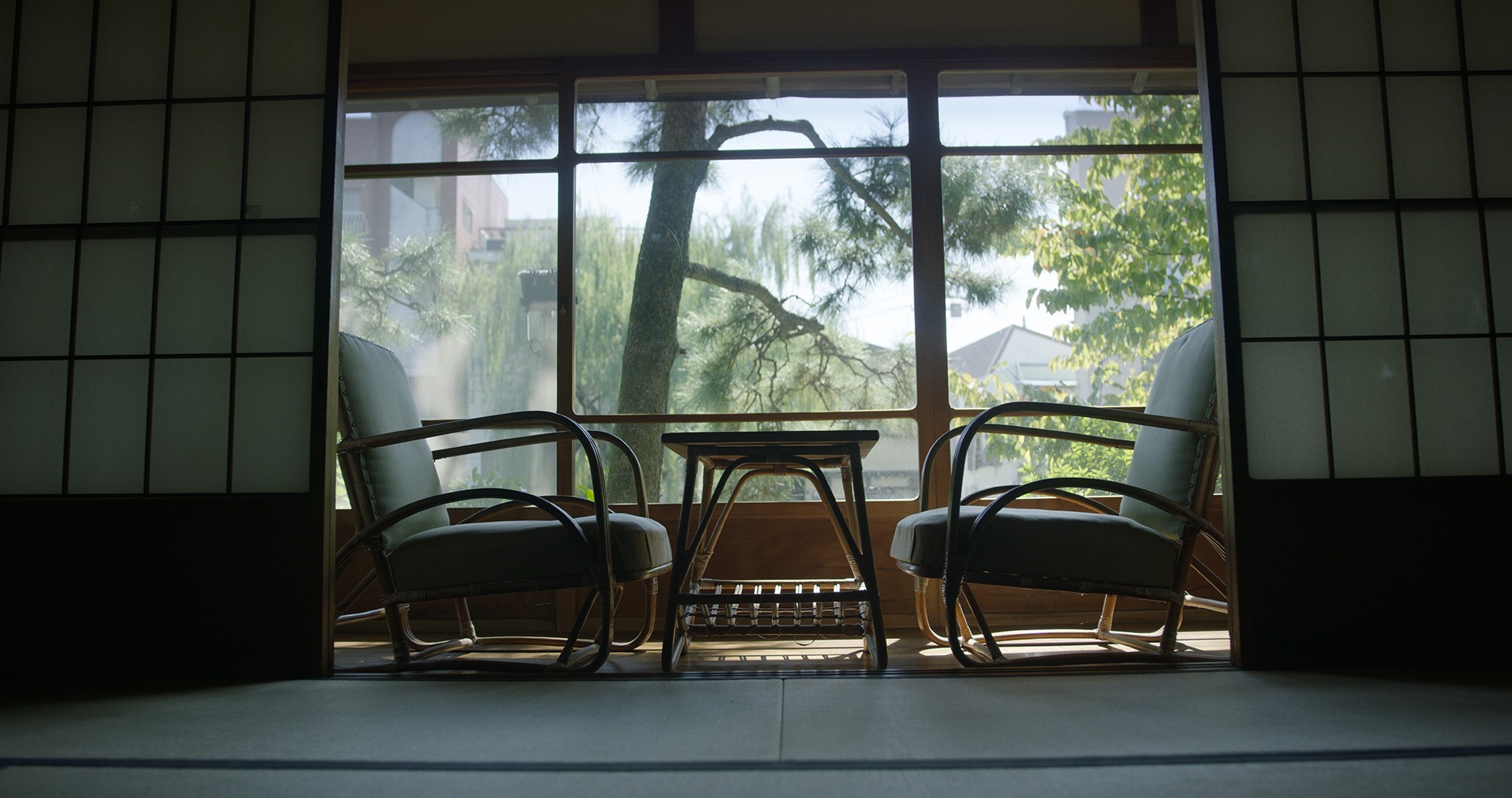 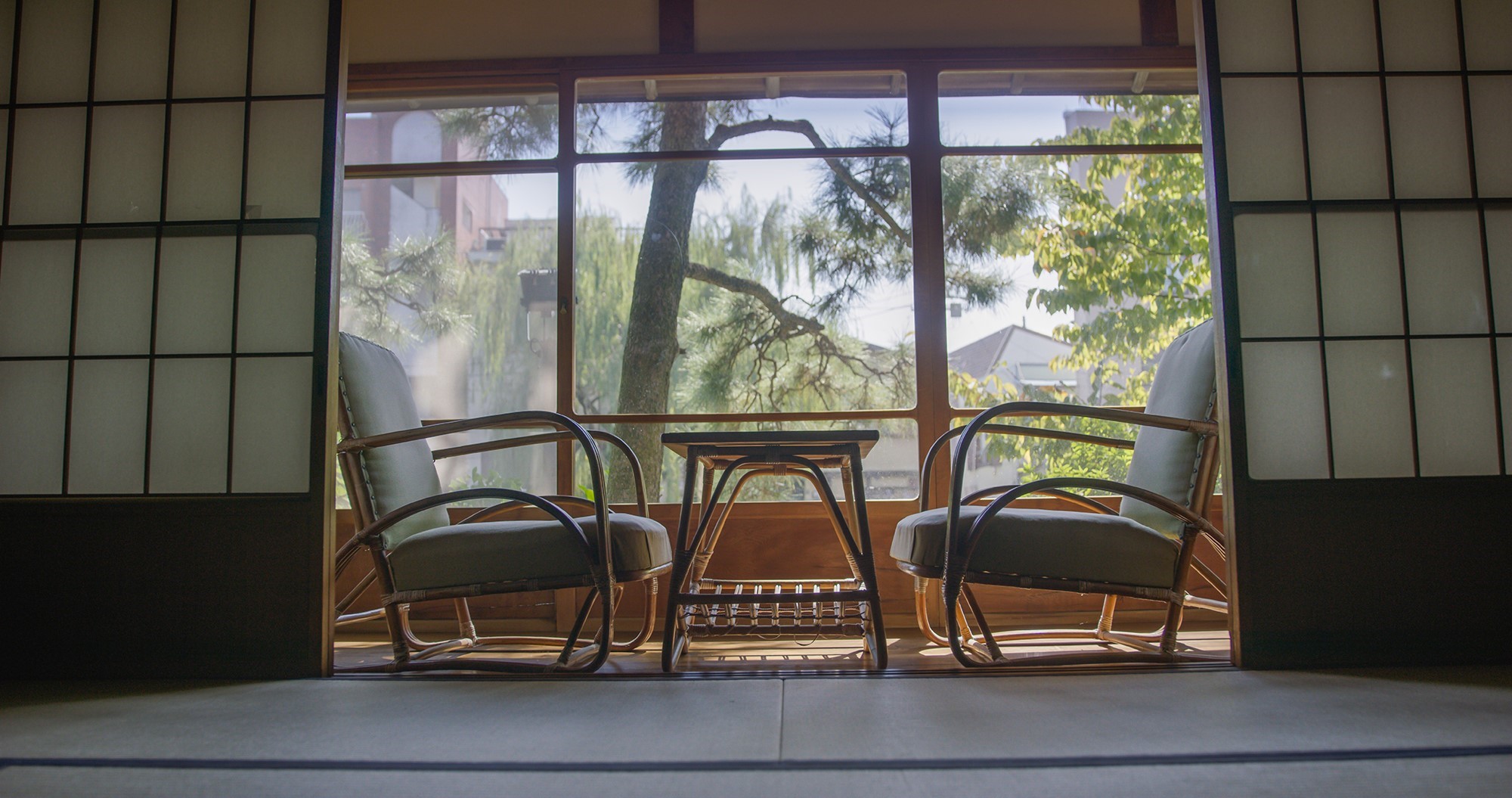 ▲The resilience of shadow is also very high. Gradation is widely intact from the highlighted to shadow areas.

For the last test, we set out to find a setting with the maximum amount of contrast to give the cameras a true challenge. There was no better location for this than a dark cave, whose small opening let in a sliver of direct sunlight. In a setting like this, we usually need to make a choice between highlights and shadows and eliminate the other. For both the X7 and Weapon 8K, we prioritized highlight gradation and got rid of the shadow area. It turned out that the results were amazing. 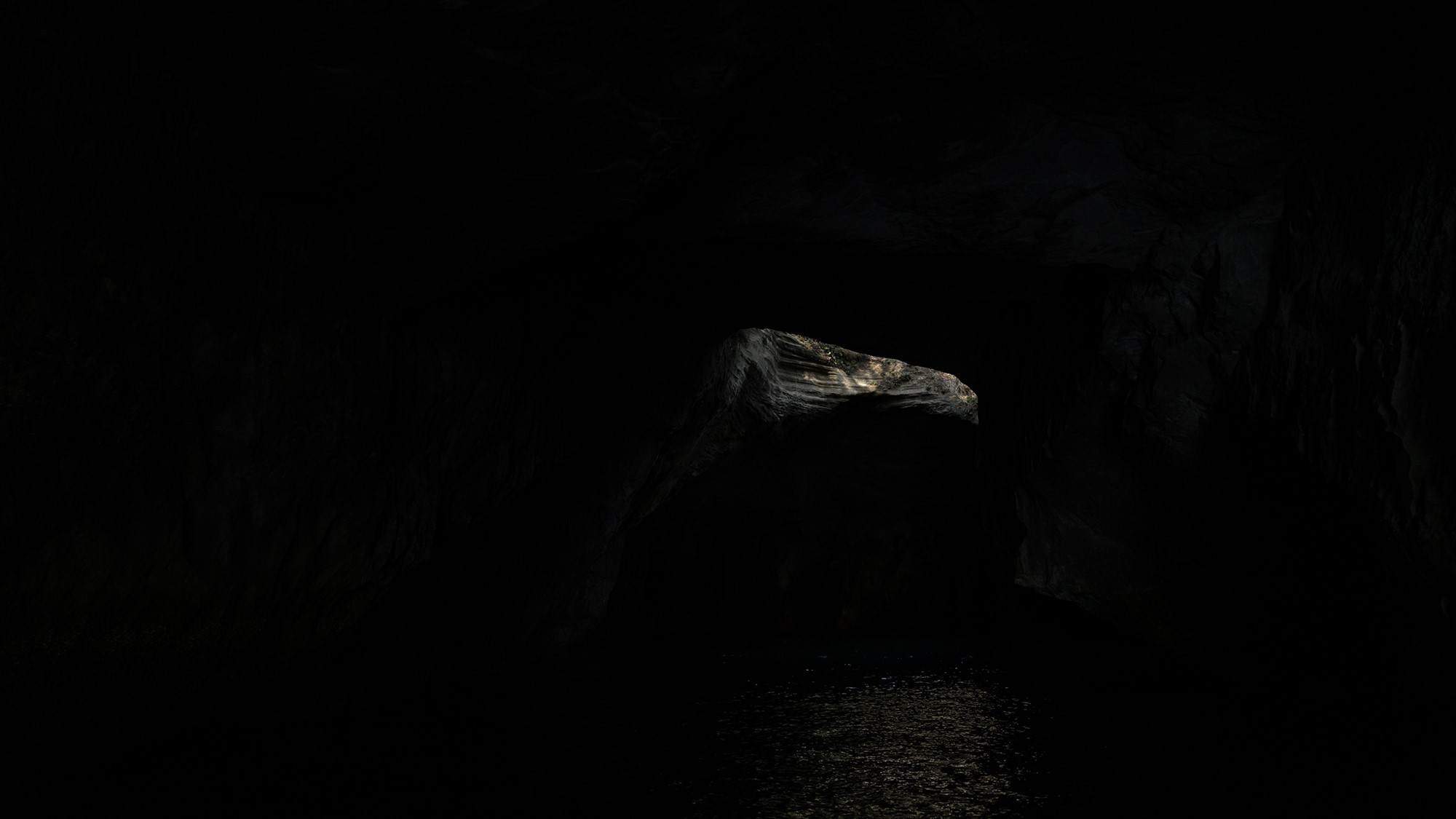 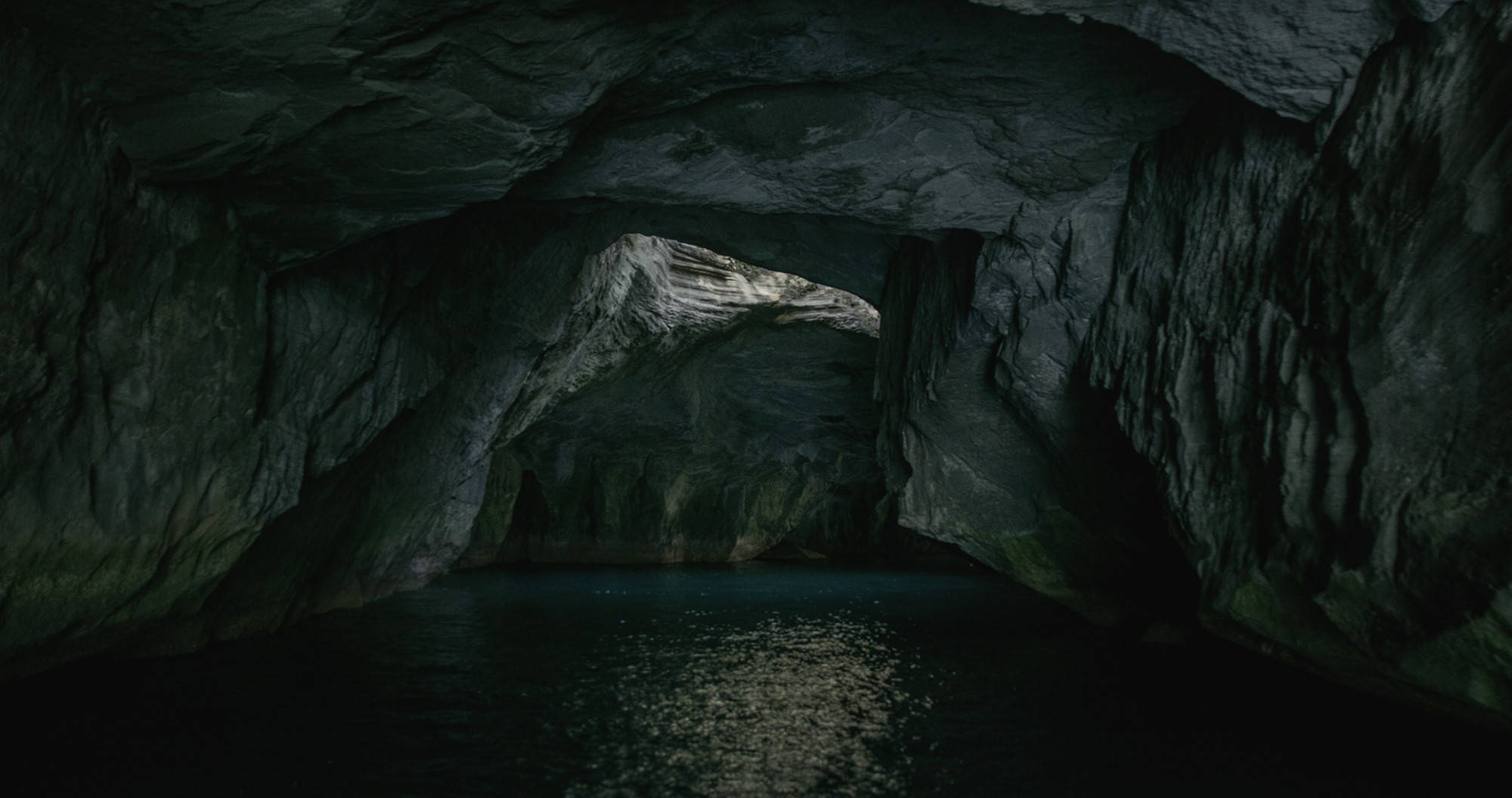 ▲We enhanced the data of the X7 with Lightroom for up to 4.3 stops with no color break.
We tuned the exposure to the opening of the cave, underexposing most other areas. We then forcibly dragged the exposure to 4.3 stops and succeeded in recovering gradation with minimal noise. Usually, data starts to get broken with most cameras if the exposure is dragged around 2 to 3 stops. So the test results were a welcome surprise.

Our comparison test was just for one day, we didn’t use a strict laboratory testing environment, and we didn’t conduct any technical analysis. However, we gathered that with a larger sensor, the X7 is definitely an advanced camera. Breaks in highlighted areas are further reduced, and the overall dynamic range is notably improved. Also, we did not feel much of a difference in dynamic range between the X7 and Weapon 8K. This all translates into a huge advantage for filmmakers, who can easily combine X7 footage with any taken by other high-end cinema cameras.

Another huge advantage of the X7 is seamless integration with the Inspire 2 drone. Up until now, high image quality with a drone meant mounting an actual cinema camera, resulting in a bulky aerial platform with limited mobility. The X7 effectively comes as a leading tool for production and commercial filming, where the highest quality is the standard.